I am a Disciple of Christ. 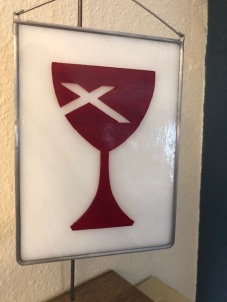 That means something different to me today than it did two years ago or five years ago or ten years ago. And that’s okay… which is exactly the point.

I recently wrote about how my husband Jonathan and I read books together during his second deployment as a part of our theological and ideological shift. After the awareness that we were no longer who we were began to set it, he suggested we read People of the Chalice, a little blue book about the church we would eventually join, the Christian Church (Disciples of Christ). In it, we read about a group of people who sought to follow Christ but without doctrinal statements or tests of faith and who were more interested in everyone being at the Table than drawing lines about who was out and who was in.

And that book changed my life.

Shortly after that deployment, we moved to Huntsville, Alabama, and started attending the Disciples church there. I will not lie: I didn’t love it. I wasn’t really sure if they were Christians. I wasn’t sure that was how I wanted to raise my kids. I wasn’t sure how a church that did not have doctrinal statements could claim to care about Scripture, because doctrinal statements were the only way I knew to discern faith and theology. That ebb and flow I talked about in my last post? Yeah, I was ebbing and Jonathan was flowing. For him, that congregation and denomination became home… and after much thought and prayer, many long conversations and reading some more, his ordination and standing were recognized by the Disciples in 2010.

Later that year, we moved again. I was mid-deconstruction and still didn’t know what I believed about a lot of things… I could tell you all the things I wasn’t, but I really wasn’t sure yet what I was.

In an effort to compromise, we tried churches of several different stripes, looking for the best blend of where he connected and where I connected. I was grasping to hang on to the evangelical church, but each week in those pews I got more and more unsettled and uncomfortable with what I was hearing. Before long, I was certain that that was not, in fact, how I wanted to raise my kids.

It wasn’t my head or my heart that told me I needed to leave evangelicalism; it was my gut. I just couldn’t bear to sit in an evangelical church any more.

I needed to be rooted, and I needed a church that held room for those roots to expand.

So we found a Disciples church close by and immediately knew that was it. From that pulpit, I heard challenging sermons about caring for and loving all of God’s creation — including the environment and people unlike me. I watched the congregation have some hard conversations and the pastor handle it with grace. When we moved to Kansas a year later (yes, quick moves!) It wasn’t even a question: We were Disciples. I started seminary and got connected with local pastors, and I settled in to my new home.

Of course, the thing that drew me to the Disciples — and the thing I love to this day — can also be frustrating. It’s hard to articulate clearly what our identity means when we have “no creed but Christ,” difficult to cast vision when every Disciple has a different idea what that should be — and just as much voice at the table. It gets frustrating when we will not acknowledge with unified voice that belief and identity are not the same, and people suffer because of it.  It’s frustrating when we move slowly on important matters.

But I’ve also realized I what I misunderstood about those missing doctrinal statements years ago:

Just because we don’t need to agree on theology, that does not mean we don’t care about theology.

Just because the denomination does not mandate what every pastor and parishioner holds true, that does not mean that no one holds anything true. (Quite the opposite!!)

Just because we do not have one agreed-upon understanding of every passage in the Bible, that doesn’t mean we don’t care about Scripture.

Some are more formal, others less formal, others informal. Some are conservative, some are liberal, most are somewhere in between. Some congregations will only call ordained ministers, while others don’t. Preaching styles vary; governance structure varies; culture varies. There is no set description of what all Disciples churches are like, which is both a gift and a challenge.

But the longer I’ve been a Disciple, the more I have witnessed a deep love of Scripture, of God, and of humanity. Sure, we have different perspectives, but we have some values in common, some things that we tend to do. We tend to interpret Scripture as an authority but not a handbook. We tend to take cultural, historical, and social context into our reading of the text. We tend to be more focused on how our faith compels us to act than what our faith compels us to think. We tend to center ecclesiology, welcoming all to the Table “as God has welcomed us.”  We tend to focus on the realm of God as more about what happens on earth than what happens after death. We tend to theologically reflect together, recognizing that no one person — or church — holds all the answers.

Next week, the Disciples of Christ will gather for our biennial General Assembly, and I couldn’t be more excited — even my kids have been counting down the days, anxious to see their “Assembly friends” and meet new ones. After my first Assembly, I wrote about the “new normal” of the denomination from the perspective of a “new-ish” Disciple, someone who wasn’t raised this way. I left that Assembly so grateful to have found my people.

And I’m not alone — many Disciples weren’t born into this church; because we are such a welcoming place, we have people from all sorts of backgrounds. Everyone found their way here for different reasons, and we keep adding space to the Table. We’re like that family at Thanksgiving who sets out extra plates, never really knowing what neighbors or friends or near-strangers might join us… but there is always room.

3 thoughts on “Finding Home as a Disciple of Christ”

The Chaplain and Morale: A Conundrum.

Cleft of the Rock